When Asher Camp was born five years ago, life was good for his parents, Amanda and Jeremy Camp, and their two girls. They welcomed their new son and watched him grow and progress.
But when he hit six months, his parents began to realize he wasn’t progressing as their daughters did. Concerned, they sought medical attention. They learned quickly that Asher has Type 1 Spinal Muscular Atrophy. 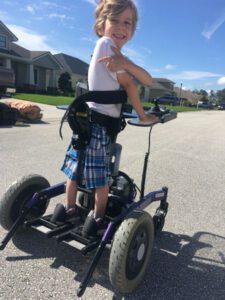 Amanda Camp says the couple’s decision to settle in Lakeland was made without knowing Asher would be in the best place possible to find treatment, including becoming one of the first patients in an experimental drug program. Unapproved by the Federal Drug Administration, Nusinersen was designed to help patients with SMA, a genetic neuromuscular disease that leaves children with no nerves to control muscle movement. Most children can’t crawl, walk or hold their head up, and most don’t live beyond 2 years old.
With only four sites in the country involved in the experiment, it was “sheer luck” one was at Nemours Children’s Hospital in Orlando, Amanda says. “He was the youngest infant in the world to be treated.”
Now approved and administered under the name Spinraza, the drug has shown promise in Asher and others. The early days were tense, filled with concern about putting their 7-month-old son on an experimental drug. But the decision to move forward with treatment less than a week after he was diagnosed was better than the alternative.
“I’ve been doing advocacy work, so I get to meet families who have children or have lost children,” says Amanda, who posts updates on her Facebook page “Arms for Asher.”
“It’s always an overwhelming feeling; we just had this amazing opportunity. If Asher was born six months earlier, we wouldn’t be where we are today.
“Everyday we live in a place almost of disbelief. Is this really our life? But at the same time, it also brings a lot of different type of stressers,” Amanda says. “We’re groundbreaking. Living life with SMA never looked like this before.”
Amanda and Jeremy, along with Leyna, 9, and Olivia, 6, must adapt to Asher’s changing abilities while also being mindful of his 32-pound body. “He’s a fragile little boy. He looks so much healthier, but he’s not. We have to be careful with his activities, especially around other children. It’s a balancing act.”
Asher interacts with other children in an exercise class at Haka Fitness in Lakeland, where owner Rebecca Wroten Maglischo says he’s just as adventurous as other 5-year-olds.
“Your knee-jerk reaction might be to feel sorry for him or do everything for him,” she says. “But the kid has spirit. He wants to play and experiment and push every limit that is put in front of him.”
He has good and bad days, especially after he receives an injection in his spine every four months — something he’ll get for the rest of his life. And a recent illness set him back — he lost five pounds. Getting him to gain weight and build muscle mass is a constant battle. But he has his favorite foods: Lentils, peanut butters and tacos.
Another battle right now includes getting new equipment that fits his growing body.
“He never had a power wheelchair” until one was just approved, Amanda says. “His respiratory and muscle tone are much weaker (than others his age), so when going out to someplace like Legoland he would not last more than an hour,” she says. Now, “he will have a chance to interact with others, another level of socialization.”
He also has a Standing Dani that he’s using to keep him upright, to “keep his tendons stretched and so he’s not always in a sitting position,”
For now, his prognosis is good. “We’re just living out the experiment,” Amanda says. “He’s in the second phase of human data. Five, 10, 15 years from now — we don’t know what will happen. We know there is a gene therapy on the horizon — they are testing it. It would decode the DNA and replace the gene that’s missing. But the science of it is tricky.”